Visualizing the Nintendo Sega War of 1997

I grew up in the 90’s when the video game wars were going on. And despite the fact that I’m approaching middle age with a wife and kids and have no time for video games, whenever I have the time I like to watch Gaming Historian’s excellent YouTube channel about video games. Seriously, if you haven’t heard of the channel you have to check it out. The production quality is better than television and the research is excellent.

While watching Gaming Historian videos last night, I realized that there was some data on the internet.

I explored the data for a few minutes before realizing I should represent the sales a proportion of total annual sales - because the video game market has been explosive over the past 40 years.

The next thing I did, was isolate the battle between Nintendo and Sega.
You can see in this chart just how badly Sega was decimated in 1997. According to wikipedia,

after the launch of the Nintendo 64, sales of the Saturn and Sega’s 32-bit software were sharply reduced. As of August 1997, Sony controlled 47 percent of the console market, Nintendo controlled 40 percent, and Sega controlled only 12 percent.

Apparently, Sega laid off 60 of its 200 employees in North America following that year. They never recovered. 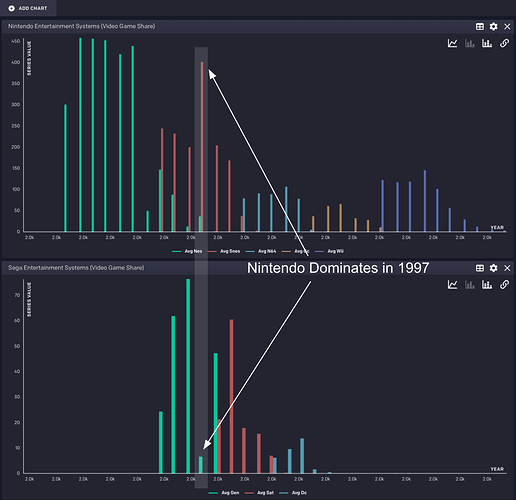